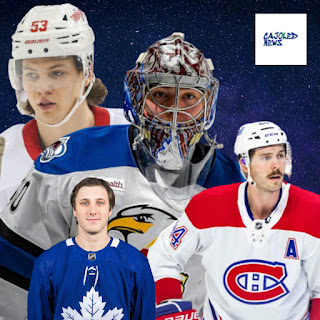 Yes, at last we are nearing the start of the 2022-23 season, a time in when all 32 teams have a shot at winning Stanley Cup. Here are some of the top headlines and notes, prior to the NHL season:
Steeves Looks to make Leafs Roster
Steeves, a 22-year-old undrafted player, hopes to build on his successful season last year and make a run for an NHL roster spot.Steeves returned to Toronto after a quick trip to Minnesota to see his family this summer in order to meet with the development team and work for the upcoming season.
Steeves was signed out of the University of Notre Dame by the Maple Leafs after spending three seasons in the NCAA. The New Hampshire native found immediate success playing in the AHL, recording 46 points in 58 games.
He’s a great skater, has incredible speed, and a lethal shot. Steeves played a brief stint with the Maple Leafs last season. In three games, the centerman recorded his first career assist.
The Leafs will once again look to younger, less expensive players to save cap space, as they are currently just over $1,000,000 over the cap hit.
Joel Edmundson to Lead Habs D-core
The recently named assistant captain, Edmundson, will lead the Habs' defensive core this season. With the likes of Shea Weber and Jeff Petry no longer in the Montreal organization, the team will lean on a veteran, shutdown d-man, Edmundson.
Edmundson signed with the team prior to the 2020–21 season and is currently in the third year of a four-year, $14 million contract. Edmundson's annual salary is expected to be $3.5 million.He has developed into a reliable defender for the Habs, displaying reliability in the defensive zone, with good size at 6-foot-4 and 227 pounds.
The Manitoba native isn't necessarily a two-way, all-star defenseman. But he is a player that will play a high-caliber role as a shutdown, puck-moving player. Last season, playing in 24 games, the d-man recorded six points.
Edmundson has over 400 games of NHL experience, playing for both the Montreal Canadiens and the St. Louis Blues. Montreal will need Edmundson to step up defensively to make a push for a playoff spot.
2022-23 will be the Make-or-Break Year for Justus Annunen
Once top goaltending prospect Justus Annunen achieves his first AHL success,The Stanley Cup winner, Annunen (served as the third-goaltender during the playoffs), got his first bit of NHL action last season. However, the goalkeeper has struggled on a consistent basis since arriving in North America from Finland.
Annunen has yet to post an AHL save percentage higher than .900 or a goals-against-average higher than 2.93.The Finnish netminder has been struggling the past few seasons, playing for a poor Colorado Eagles team.
Annunen had a.893 save percentage and a 3.01 goals-against-average in 48 AHL games last season.One bit of positive from Annunen's past season would be his solid stint in the NHL. Annunen played in two NHL games and recorded his first win.
Annunen is entering his final season of his three-year entry-level contract. If the netminder is unable to find success playing in the American Hockey League, it is extremely likely that he will head back to Finland to try and hone his game.
Annunen's final season playing in the top Finnish league saw him put up a .929 save percentage and a 1.77 goals-against average for Karpat. Annunen is the former 64th overall selection by the Avalanche during the 2018 NHL Entry Draft.
The Detroit Red Wings will Surprise Teams this Season
The Detroit Red Wings are a good team. Steve Yzerman, also known as the Yzerplan, has constructed the team to become a powerhouse within the next couple of seasons. The team is full of young talent, along with the addition of seasoned, successful veterans.
Yzerman had a big offseason, bringing in numerous top free agents. The list includes Ville Husso, Ben Chiarot, Dominik Kubalik, and Andrew Copp.
Detroit will run a 1A, 1B goaltending plan in net to start the season. The Wings have two goaltenders that have produced starting-caliber seasons, although they will be able to rely on each other in support. Alex Nedeljkovic had a .901 save percentage and a 3.31 goals-against-average for Detroit last season.The newly acquired netminder, Ville Husso, stole the St. Louis starting job from Jordan Binnington. He had a 25-7-6 record with a .919 save percentage.
Defensively, there is no doubt the Red Wings will be better this season. Moritz Seider is coming off his rookie season and will only get better. The team will also have up-and-coming d-man talent in Simon Edvinsson, who will have a shot at making the team out of training camp. Edvinsson had a terrific season last year with Frolunda of the SHL, chipping in with 19 points. And lastly, with the depth additions of Ben Chiarot, Robert Hagg, and Steven Kampfer, there is doubt that the Red Wings will not have fresh legs throughout the season.
Offensively, the Wings brought in major free agents and picked up other key pieces in trades. Allan Perron, Andrew Copp, and Dominik Kubalik will all enter their first season with the team. Perron was one of the best forwards for the St. Louis Blues last season, scoring 57 points in 67 games. Andrew Copp will also add a well-balanced two-way chippy game. Lastly, it is also likely that young stars and former high-end picks like Filip Zadina and Michael Rasmussen will breakout this year.