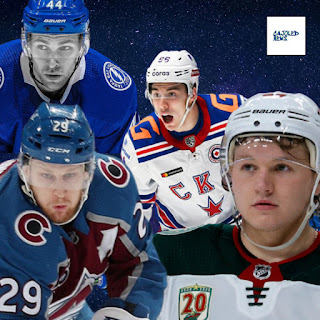 Yes, at last we are nearing the start of the 2022-23 season, a time in when all 32 teams have a shot at winning Stanley Cup. Here are some of the top headlines and notes, prior to the NHL season:
Kaprizov Looks to Repeat Successful Season
The 25-year-old Russian forward is coming off a 108-point season. Unfortunately, for the Wild, they weren't able to make any big splashes this offseason, besides re-signing important figures on their current team. With the loss of Kevin Fiala, it is now solely up to Kirill Kaprizov to lead Minnesota's offense.
The Wild selected Kaprizov with the 135th overall selection in the 2015 NHL Draft. The Wild selected Kaprizov out of Novokuznetsk Metallurg of the KHL. After the draft, Kaprizov would play four more seasons in the KHL, then opt to make an impact on North American ice.
Ever since getting to Minnesota, Kaprizov has shown himself to be a star offensive player. Kaprizov's resume includes an all-star appearance and the Rookie of the Year trophy. In just 139 NHL games prior to this season, the Russian forward averaged over a point per game, with 159.
Kaprizov will once again play on the Wild's top forward line and their top power play unit. A projected total for Kaprizov this season would be 44 goals and 50 assists in 82 games.
Andrei Kuzmenko: The Risk, The Reward + Projections
Kuzmenko was a star player in the KHL, but can his game translate to the NHL? In the past, there were many instances of drafted KHL players deciding to stay in Russia (finding success) and then transferring to the NHL ice. For example, Nikita Guseva and Vladislav Kamenev.
Kuzmenko is expected to put up numbers similar to those he put up in the KHL.Although the NHL is a totally different league, the Russian forward will look to adapt and have an easy transition into the NHL game. Last season, playing for CSKA Moscow, Kuzmenko recorded 20 goals and 33 assists in 45 games.
The signed-Canucks forward is likely to start the season in a top-six role. Kuzmenko will have a high-end offensive role, slotting in on the power play. The 25-year-old is an undrafted forward who has spent the past eight seasons playing in the top Russian league.
Kuzmenko is projected to record 15 goals and 20 assists if he were to average and play the full 82-game season.
Nathan MacKinnon Contract Update
There is no doubt that the Colorado Avalanche will be paying Nathan MacKinnon the big bucks. The Stanley Cup champ is coming into the season in the final year of his prior seven-year contract, worth just over $44,000,000.
MacKinnon reported that his contract extension with the Avs is close to being concluded and over single digits. The Halifax native is coming off of an 88-point season in just 65 games. The forward was extremely good in the playoffs, leading the Avs to a Stanley Cup and recording 24 points in 20 postseason games.
It is rumored that MacKinnon's contract will be close to, or greater than, that of Connor McDavid, who signed an eight-year, $100,000,000 contract. MacKinnon is noted as one of the best players in the entire NHL, and will look to stay in the state of Colorado for awhile.
Underrated? That's Jan Rutta!
Rutta is not the high-end defenseman that is noted around the league and widely known by the fans. However, Lightning fans are well aware that Rutta was a key component in their previous Stanley Cup victories.
The now-Pittsburgh Penguins player is coming off of the best offensive year of his career. With just 18 points in 76 games, Rutta is not a dynamic offensive player. But what he does bring to the Penguins' lineup is a very solid defensive and shutdown game.
Rutta played third-line minutes with the Lightning last year and was rock solid. Rutta is a player that can be widely used on the penalty kill, with 71 blocks and 93 hits last season. Overall, Rutta is a trustworthy player who can be relied upon to kill big minutes.