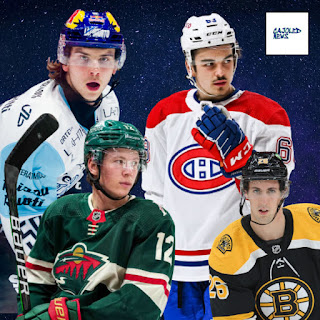 Yes, at last we are nearing the start of the 2022-23 season, a time in when all 32 teams have a shot at winning Stanley Cup. Here are some of the top headlines and notes, prior to the NHL season:
Lambert finds game at Prospects Tournament
Brad Lambert is regarded as one of the prospects whose draft stock consistently dropped throughout his draft season. Lambert was ultimately selected 30th overall by the Winnipeg Jets at the conclusion of the first round.
Lambert struggled throughout his season in the Finnish Liiga, starting the season with JYP and then being moved mid-season to Pelicans. Lambert even struggled to find his game at the junior level, representing Finland at the World Juniors.
Lambert started the 2022 World Juniors, paired on the Finnish second-line, with second unit power play time. But by the end of the tournament, Lambert was regarded as the 13th forward, and he ended up being scratched for Finland's gold medal game. Lambert recorded just one goal in five games.
The Finnish forward has clearly rejuvenated himself over the summer, and he is currently playing for the Winnipeg Jets in the Prospects Tournament. Lambert was seen using his speed and edges to blow by defenders, causing havoc and scoring a goal.

Lambert is expected to play the 2022-23 season, with the Seattle Thunderbirds of the Western Hockey League, the Jets prospect looks to refind his game, in the hopes of having a long NHL career.
Bruins Prospects Impressed at Buffalo Prospect Tournament
The Boston Bruins were recently ranked as having one of the worst prospect systems in the entire National Hockey League, but after this weekend they certainly have some interesting pieces. Boston ended up beating the Senators prospect team, and then falling to the Penguins team.
To start off with, the player that stood out the most throughout the weekend would have to be Fabian Lysell. The Bruins' first-round pick from 2021, has definitely made strides in his game from last season. Lysell is definitely ready for the pro game and has shown he has graduated from the junior level.
Lysell displayed an immense amount of skill playing a high-role position this weekend. Lysell was seen blowing by the opposing d-man, short-handed, then riffling the puck to score a short-handed goal.

When it comes to drafting, the Bruins haven't had the draft capital available to themselves over the past few seasons. Although the Bruins have done a nice job of signing undrafted NCAA and CHL graduates, An example would be Marc McLaughlin, who ended up suiting up for 11 NHL games last season.

Another undrafted standout would be Luke Toporowski, who signed an AHL contract with the Providence Bruins earlier this year. Toporowski is described as an undersized winger who has a nose for offense. Toporowski scored two goals to lead the Bruins to a 1-0 victory over the Senators in Game 1.

After displaying a successful run at the Buffalo Sabres Prospects Tournament, Boston ultimately showed the true value of their prospect system.

Wild need Boldy to take his Game to a new Level

Matt Boldy was a pleasant surprise for the Minnesota Wild last season. Boldy was inserted into the lineup mid-season and never gave Minnesota management a chance to take him out of the lineup. Boldy ended up playing in 47 games, scoring 15 goals and providing 24 assists.

With the likes of Kevin Fiala gone, the Wild will look for other pieces in their lineup to step up and to fulfill the missing role of their previous star.

Boldy was selected 12th overall by the Wild during the 2019 NHL Entry Draft. Boldy, a Massachusetts native, was part of the loaded NTDP team that saw the likes of Trevor Zegras, Cole Caufield, and Spencer Knight, who have established themselves as full-time NHLers.

The Wild will depend on Boldy to have another successful season.

Xhekaj isn't necessarily the most regarded prospect within the Montreal Canadiens roster, but his performance at the recent prospect tournament shows a lot about his character.

The Habs prospect plays an "old school" type of defensive game. He has size, skill, and likes to throw his weight around. He is your traditional shutdown defenseman that doesn't create a lot of offense but will stick up for teammates.

And that's exactly what the Habs signee did this weekend against the Ottawa Senators. Xhekaj got into an altercation with Zachary Massicotte. The two ended up dropping the gloves, and before long, Xhekaj KO'ed Massicotte.

Xhekaj is no stranger to getting into brawls. Earlier this season, the Habs prospect was suspended for making a gesture after he fought an Owen Sound Attack player. Last season, spending time with both the Kitchener Rangers and Hamilton Bulldogs, the Habs players recorded 34 points, along with 138 penalty minutes, in just 51 games.