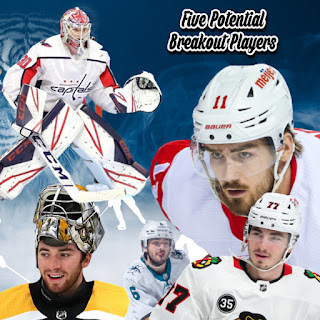 The NHL season is just around the corner, with training camp starting up in a few weeks and preseason games scheduled for mid-September. Here are five NHL players that are likely to break out during the upcoming season:
#5 Kirby Dach - Montreal Canadiens
Dach was playing in a horrible situation with the Chicago Blackhawks. The team was basically tanking in the hopes of a high draft pick. With the Canadiens, it is likely that Dach will have a role on the top offensive lines of a stacked Habs offense.
For the Blackhawks last season, Dach played in 70 games, recording just nine goals and 17 assists for a total of 26 points. The former third-overall pick during the 2019 NHL Entry Draft struggled to produce offense throughout the season.
Dach is a player that plays with solid size, standing at 6-foot-4-inches. He plays a well-rounded game and uses his speed to beat defenders. He is a playmaker who protects the puck well.
Dach was acquired through a trade from Chicago to Montreal. In return, the Habs sent over the 13th overall pick and the 66th overall pick from the past draft.
#4 Ryan Merkley - San Jose Sharks
The Sharks' first-round pick during the 2018 draft, made sizable improvements to his game all throughout last season. Merkley spent most of the past season playing in the NHL and recorded six points in 39 games.
Merkley played a bottom-pairing role for a bad Sharks team, thus the potential reason for the limited amount of offense. Merkley is a true-offensive d-man who will have an opportunity to play a higher offensive role after the Sharks traded Brent Burns.
Merkley impressed defensively while playing in the AHL last season, thus resulting in a call up to the NHL. Merkley racked up 19 points in 30 games with the Barracuda last season.
Of course, the Sharks blueliner is still young, but due to the recent trends of improvement and the greater opportunity, it is likely Merkley has an even better 2022-23 season.
#3 Ilya Samsonov - Toronto Maple Leafs
Goaltender Ilya Samsonov is looking for a bounceback season after an underwhelming 2021-22 campaign with the Washington Capitals. The Toronto Maple Leafs signed the Russian netminder to a one-year contract, and Samsonov has every opportunity to become the Leafs' starter.
Samsonov will split the crease with teammate Matt Murray to start the season with the Maple Leafs. It is likely that the two will split time to start the season, then the Leafs will assess from there.
The Leafs are a strong defensive team, led by the likes of Morgan Rielly and T.J. Brodie, among the top names. Samsonov should have an easier time playing for the Leafs than for the aging Capitals.
Samsonov is a former first round pick of the Capitals during the 2015 NHL Entry Draft. The young goaltender hopes to get his career back on track.
#2 Jeremy Swayman - Boston Bruins
Jeremy Swayman is still considered the best goaltending prospect in the Boston Bruins organization. The Bruins' netminder put up solid numbers this past season, with a .914 save percentage and a 2.41 goals-against-average.
The Bruins will look for their netminder to take the next step to become their starting goaltender. The Bruins will roll with both Swayman and Linus Ullmark to start the season.
This is Swayman's net to win, as partner Linus Ullmark's contract can be moved after the end of the season, as Ullmark will hold an N-NMC. If Swayman were to perform and breakout this season, it would help Boston vitally by moving some cap space and getting a decent return.
Swayman is just about to turn 24 years old this November. The Alaskan goaltender has a career .920 save percentage and a 2.23 goals-against average in the National Hockey League.
#1 Filip Zadina - Detroit Red Wings
Zadina is a player that was once touted as a top NHL prospect within the Detroit Red Wings organization. The Czech-born forward was selected 6th overall during the 2018 NHL Entry Draft. The winger has struggled to produce at the pro level ever since making the jump during the 2018-19 season.
There is no doubt that Zadina is an extremely capable offensive player who can put points up. Last season, playing the entire year in the NHL, Zadina suited up for 74 games and recorded 24 points.
After gaining NHL experience the past two seasons, Zadina is still considered a prospect at the age of just 22-years-old. It is extremely likely he will have a breakout season. Zadina has played in 160 NHL games and has recorded 25 goals and 36 assists.
To Conclude:
With training camp beginning in a few weeks and preseason games slated for mid-September, the NHL season is just around the horizon.