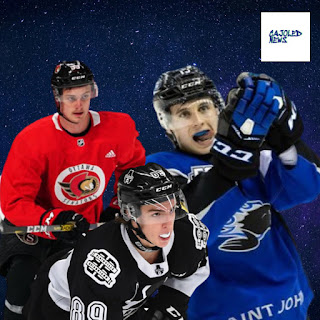 What is the definition of underrated? In terms of hockey, a player that is not highly regarded in the press, but should be valued as a top prospect. Today we will cover the most underrated prospects from the Atlantic Division, please note that we have not included any first-round draft picks on this list.

Tourigny is your description of an undersized, skillful defenseman that has put up excellent numbers at the junior level. Tourigny was a seventh round pick by the Montreal Canadiens during the 2022 NHL Entry Draft (drafted as an overager). The Quebec d-man is known for his dynamic ability to record points. Last year, playing in the QMJHL, Tourigny put up 80 points in 65 games.

Tourigny is a player that has an electrifying amount of skill. He uses his speed to rush with the puck often and he likes to make plays for teammates. He is extremely mobile, and, standing at 5-foot-8-inches, he gets around the ice surface very well.

The D-man lacks a consistent defensive game; he doesn't play a physical game and can be easily knocked around. Due to the dramatic inconsistency right now, Tourigny doesn't project to become a full-time NHL player. But for a seventh-round pick, the Habs have got themselves an extremely raw player who may be able to develop his defensive game and become a capable top-four pairing player.

The former Ottawa Senators second-round pick in the 2021 NHL Entry Draft has been developing through the Ontario Hockey League System.Roger is a steady defensive d-man who plays a shutdown role on his team. Standing at 6-foot-4-inches, he is one of the tallest players in the junior league, and his game revolves around physicality.

Roger split last season between playing for the London Knights and Kingston Frontenacs. With London, Roger was named an assistant captain at just 19 years old. Roger played in 55 games last year, recording one goal and 12 assists.

The Ottawa prospect doesn't project to have a high offensive ceiling. But he is a player that can compete defensively with his good speed, smart decisions, and physical game. Roger would most likely fit into the NHL as a third-pairing shutdown defenseman who will see penalty kill time.

Toronto's fourth-round selection from the 2020 NHL Entry Draft has a high shot at becoming a successful puck-moving defenseman in the NHL. The right-handed defender brings talent in every zone. He sees the ice well, setting up his teammates often in the offensive end with a crisp pass.

Last season, playing for the Memorial Cup-winning Saint John Sea Dogs, Villeneuve recorded 56 points in 64 games. He plays big minutes and holds his own on the blue line when defending the rush. There are some occasions where he can get beat by a speedy forward, but more often than not, he shows up and breaks up a play.

“Villeneuve is a decent two-way defenseman. He will make quality shots from the perimeter and completes smart and efficient passes in the offensive zone… He is efficient in all three zones and has shown to be a dependable puck mover. In terms of his skating, his edgework is exceptional and he transitions well from forward to backward… He more than likely will be a serviceable top four defenseman in the NHL.” – Josh Tessler, DobberProspects

“He’s an all-around player capable of impacting the game in all three zones, with his influence being most pronounced in transition. His sense for space on the breakout and mobility to navigate forechecking pressure to create time for himself is a terrific base of tools that should allow Villeneuve to transition into a successful NHL player… Improved skating will be important for Villeneuve to translate his mobility to the faster pace of the NHL, but I don’t see it as a major point of concern as that’s one of the more improvable traits for a player his age.” – Sam Happi, DraftGeek