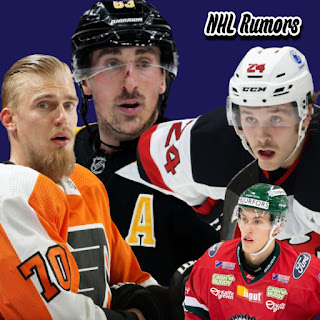 Yes, at last we are nearing the start of the 2022-23 season, a time in when all 32 teams have a shot at winning Stanley Cup. Here are some of the top headlines and notes, prior to the NHL season:
Bruins Season Relies on a Strong Start
There is no doubt that, on paper, the Atlantic Division looks to be the most competitive division in the entire National Hockey League. The Boston Bruins will be without stars Brad Marchand, Charlie McAvoy, and Matt Grzelcyk to start the season.
Without their three stars, the Bruins will look for various other players to step up and play in the roles of the key missing pieces. For example, Hampus Lindholm fills in as the number one defenseman.
A strong start could spark an unstoppable amount of confidence for the Boston Bruins. We all know that once Brad Marchand is back in the lineup, the Bruins will be close to unstoppable. Marchand is the most important player on the Bruins' roster; he brings energy, offense, and a leadership role.
An early win streak could give the Bruins the boost they need to get even better once their key players are back in the lineup. After acquiring David Krejci this offseason, Boston fans should not count the Bruins out of a Stanley Cup run.
Red Wing's Announce Detroit Prospect Tournament Roster
The Detroit Red Wings Prospect Tournament is just around the corner and is expected to start on September 15th. Detroit possesses one of the most dominant prospect pools in the entire league, and their prospect roster is no different.
The Wings d-core consists of Simon Edvinsson, Eemil Viro, and Donovan Sebrango, among some names. The Wings Prospects are expected to play a shut-down yet open-minded game, as the team is built around high-end defensive prospects.
Sixth-overall pick Simon Edvinsson will lead the team after coming off a strong season playing for Frolunda in the SHL. Donovan Sebrango is another name to look out for, as the Canadian d-man is just coming off of a WJC Gold Medal. Goaltending wise, Sebastian Cossa will lead the way in the crease.
The Prospect Tournament will consist of the Red Wings, Leafs, Blue Jackets, Stars, and Blues prospect teams.
The Rasmus Ristolainen Curse
Ristolainen is a seasoned NHL veteran who has logged over 608 games, playing a top-end role for his respectable teams. But, did you know that Ristolainen has yet to play a playoff game?
The former Buffalo Sabres first-round pick broke into the league during the 2013-14 season, and has been a mainstay in the league ever since. Ristolainen is known for his mainly offensive and solid defensive game. In 608 career NHL games, the Finnish d-man has recorded 48 goals and 218 assists.
Will Ristolainen and the Flyers finally make the playoffs?
Will Ty Smith Breakout with the Pittsburgh Penguins?
Ty Smith was a former first round pick by the New Jersey Devils during the 2018 NHL Entry Draft. Smith is an undersized, offensively gifted player who can control a power play unit with ease.
The question is, will Smith break out this season? Smith will play under different management, new systems, and maybe a change of scenery is what Smith really needs.
The D-man struggled last season with the Devils. Smith was horrible defensively and wasn't great offensively either. Smith was only able to record 20 points in 66 games while holding a -26 rating.
Playing for a contending Penguins team, Smith will definitely see a decrease in ice-time. It is likely he will receive PP2 time. Smith's spot on the roster isn't a mainstay, so the newly acquired d-man will look to impress during training camp.
To Conclude:
The NHL season, is on the horizon teams look to great ready, in the hopes of a successful season.