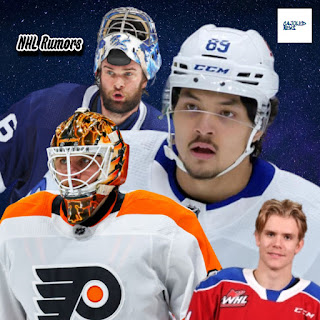 Yes, at last we are nearing the start of the 2022-23 season, a time in when all 32 teams have a shot at winning Stanley Cup. Here are some of the top headlines and notes, prior to the NHL season:
Campbell "The Missing Piece" from the Oilers Lineup
The Edmonton Oilers went all out this offseason, acquiring all-star goaltender Jack Campbell from free agency. The 30-year-old Campbell and the team announced a five-year, $5,000,000 AAV contract this offseason.
Edmonton was a strong offensive team throughout the 2021-22 season, but lacked goaltending that could steal or keep them close in a game. The team rolled with Mike Smith and Mikko Koskinen last season.
The Oilers hope that Campbell's past season wasn't a fluke in Toronto. The superstar goaltender had a .914 save percentage and a 2.64 goals-against-average.
The Oilers are a team that has been destined for a deep playoff run, with the likes of Connor McDavid, Leon Draisaitl, and Darnell Nurse, to name a few stars. Last season, Edmonton was knocked out during the Western Finals, losing to the eventual Stanley Cup champs, the Colorado Avalanche.
Habs' Prospect Guhle Looks to make Transitional "First Pro Year" this Season
The top defensive prospect within the Montreal Canadiens organization is looking to make a strong first impression as he enters his first pro hockey season. The Habs originally drafted Guhle 16th overall during the 2020 NHL Entry Draft.
Guhle has spent the past two seasons playing in the WHL, for Prince Albert and the Edmonton Oil Kings. This past season, Guhle led the Oil Kings' defensive unit to a WHL Championship and a spot at the Memorial Cup.
Guhle is a player that plays a strong defensive game. He is a big player that uses his body as well as his powerful, long stride. Guhle is a two-way defenseman. He has a strong shot and has proven to be a leader at the junior level.
Last season, playing in the WHL, the star defender put up 40 points in 42 WHL games and 16 points in 19 playoff games. Guhle is expected to start the season with the Laval Rockets of the AHL.
Will Nick Robertson Finally Crack a Full-Time Roster Spot?
Robertson is a player that has displayed high-end elite scoring at the junior and American Hockey League levels, but can he take the next step to the NHL? The Leafs prospect is an extremely shifty, versatile player that has suffered injuries that have plagued his seasons.
Last season, Robertson spent most of his playing season in the American Hockey League, playing for the Toronto Marlies. Robertson was once again phenomenal offensively. The youngster put up 16 goals and 12 assists in 28 games.
Robertson also ended up playing ten games with the Maple Leafs last season. Unfortunately, he was only able to record one goal. The California native played just over ten minutes per night and had 14 shots on goal in his brief appearance.
The 21-year-old Robertson will be in the running for a spot on the Maple Leafs' roster, as the team looks to add skill but save cap space.
About Goalie Prospect: Felix Sandstrom
When it comes to goaltending prospects, Felix Sandstrom isn't a name that is thrown around. Sandstrom is a former third-round pick of the Philadelphia Flyers during the 2015 NHL Entry Draft, who has looked good in his brief NHL and AHL stints.
Sandstrom, a Swedish netminder, played in five games last season with the Flyers. The goaltender recorded a 0-4-1 record but had an impressive .910 save percentage and a 3.23 goals-against-average. Playing in the AHL, Sandstrom's stats are very similar.
It is almost certain that Sandstrom will receive NHL playing time this year, as Sandstrom will serve as the backup to Carter Hart. Sandstrom possesses solid size, with great lateral crease movements.