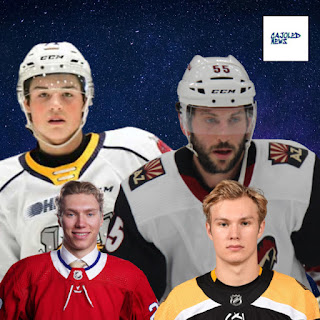 Yes, at last we are nearing the start of the 2022-23 season, a time in when all 32 teams have a shot at winning Stanley Cup. Here are some of the top headlines and notes, prior to the NHL season:
Lysell Leads B's Prospects Defeat Sens
The 2022 Buffalo Sabres have finally started for the Bruins prospects. The B's started the tournament this afternoon against a stacked, highly rated Ottawa Senators team. Key pieces on the Sens prospect team include Tyler Boucher, Ridly Greig, and Jake Sanderson.
B's Lines:
F: Lauko-Merkulov-Lysell, Toporowski-Beecher-McLaughlin, Hardie-Hall-Poitras, Abate-Schuurman-Humphrey
D: Callahan-Wissman, Brunet-Mast, Edward-Berglund
G: Bussi, Dyck
The Sens got off to an early lead as Shane Pinto snapped a power play goal by Bruins goaltender Brandon Bussi. Although just a bit later, Bruins college signee Marc McLaughlin tied the game up. Later on, Tyler Boucher, Dalyn Wakely, and a second Shane Pinto goal would score for the Senators. Boston responded with two goals from Luke Toporowski, one from John Beecher, and one from Fabian Lysell.
The Bruins ended up taking the game by a score of 5-4. Bruins prospects will later compete against the Sabres, Habs, Devils, and Penguins prospects throughout the weekend.

The Edmonton Oilers have signed Jason Demers to a professional try-out. Demers is coming off a season where he suited up for five games in the KHL and played another five games at the Olympics for Canada.

The NHL veteran has logged over 650 NHL games, recording 45 goals and 169 points. Demers will fight for a roster spot with the likes of Phillip Broberg, Ryan Murray, and Slater Koekkoek.

The Oilers have until the end of preseason to make a decision on Demers, before he once again enters free agency as an unrestricted free-agent.

For the Habs prospect team, Beck was solid in the first game of the Buffalo Sabres Prospect Tournament. The forward showed off his speed and scored off of a breakaway.

The Habs' prospect was selected by the squad with the 33rd overall selection in the past draft. Beck spent the entire 2021-22 season playing in the OHL for the Mississauga Steelheads. In 68 games, the center scored 21 goals and provided 30 assists.

Beck is touted as a high-end faceoff taker. He was voted one of the best in the OHL with a faceoff percentage of 60.6%. Beck plays a very mature, trustworthy game. He is a great skater that plays both sides of the puck. He doesn't have the most flash, but he plays the game the right way.

Foerster is a star, having played for Team Canada at the past World Juniors. The Flyers' pick was selected 23rd overall during the 2020 NHL Entry Draft. Foerster has spent the past two seasons splitting time with Lehigh Valley of the AHL and Barrie of the OHL.

Foerster was shown to be the complete package at the WJC, playing on a line with Kent Johnston and Logan Stankoven. The Flyers forward recorded three goals and three assists in seven games.

Foerster is described as a sniper with a high-caliber shot who has the ability to score goals in the NHL. If not on the NHL roster, Foerster will likely start the year in the AHL.