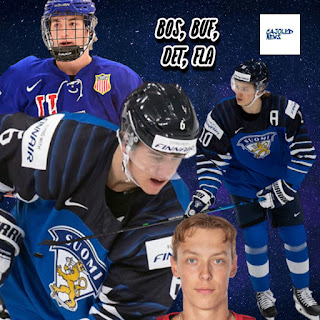 What is the definition of underrated? In terms of hockey, a player that is not highly regarded in the press, but should be valued as a top prospect. Today we will cover the most underrated prospects from the Atlantic Division, please note that we have not included any first-round draft picks on this list.
Boston Bruins - Ty Gallagher
Starting off with the Boston Bruins, we have offensively minded defenseman, Ty Gallagher. Gallagher hails from the USDT Program, and has since moved on to play for the Boston University Terriers, after being selected 217th overall by the Bruins.
Gallagher is your typical offensive d-man, with just average size, the Michigan native likes to use his speed, skill and smarts to beat defenders in the offensive zone. While stendy with the puck, Gallagher has solid defensive skills as well, he maintains a good gap, stick checks and reacts well in numerous situations.

“Gallagher is a defenseman known for having a high-end offensive game in combination with a sound defensive presence.” – Shaun Richardson, FC Hockey

Last season playing for BU of the NCAA, Gallagher played in 34 games and recorded five goals and 11 assists. The seventh round pick remains unsigned, he is an extremely raw prospect, that has a shot at making an impact at the NHL level.

William Von Barnekow is a Swedish prospect within the Sabres organization, that was elected in the sixth round of the 2021 NHL draft. The Swedish forward is a player that has found success at the junior level, but has struggled playing in the top-tier professional Swedish Hockey League.

Von Barnekow is capable of playing all three forward positions, he stands at 6-foot-4, he operates as a netfront presence in the offensive zone. The Swede doesn't posses high-end skill, but he does play a gritty like game and will possibly fit in an NHL bottom-six role.

He is a safe player, he protects the puck well with his frame. Von Barnekow started off the past 2021-22 season with Malmo in the junior leagues. He excelled offensively recording 31 points in 27 games. Mid-season the winger/centermen would be moved up to the SHL level, where he was unable to record a single point in 27 games.

This season, Von Barnekow scored his first career SHL goal, in the first game of his 2022-23 season. At just 19-years-old, the Swedish forward will likely transition to the North American ice within the next few seasons.
Detroit Red Wings - Eemil Viro
Eemil Viro, is a defensive based, two-way d-man playing for TPS Turku of the Finnish Liiga. The former Red Wings third-round pick was selected 70th overall during the 2020 NHL Draft. The left-handed defender was touted as one of the best junior d-man in the entire Finnish system.
Viro won't necessarily ever play top minutes in the NHL, but he has all the tools to fit in as a bottom-pairing defensemen in the NHL. Viro is a great skater, and plays a great transitional game on the back-end, he is a smart player, rarely turning over pucks.
“Viro is an average-sized two-way defenseman who doesn’t really have any standout qualities but he’s good at everything. He is a very good skater with edge work and three-step quickness being his biggest strengths in that area. He is also a very smart player who doesn’t usually force plays that aren’t there. He gives very good breakout passes and likes to join the rush. Even though he isn’t a puck-rusher, he can also carry the puck if passing lanes are not available. He can make flashy plays at times but those are not his calling card. Although he is a better player with the puck than without it, Viro is also a pretty good defensive player. He is not big or physical but he utilizes his stick effectively. His positioning still needs improvement but his good hockey sense allows him to improve in that area as well. Like most players his age, he needs to get stronger to win more battles at the pro level.” – Jokke Nevalainen, DobberProspects
“Very active on pinches and always looking to step up or keep plays alive – precision timing and strong backskater to retreat with tight gap – rarely looks intimidated by onrushing speed – handles all kinds of passes cleanly even on his backhand or across his body – Viro will chip and chase to himself – controlled entries and will enter the zone looking for a shot of his own even if of the low-danger variety – not much of a playmaker and his tunnel vision with the puck leads to effective but limited decisions – very sound instincts in the offensive zone and will pounce on loose pucks and take the puck around the net or look for a give and go in the low slot – passes into traffic a lot but when he does the passes usually are hard and not a careless lob to be intercepted for a quick counterattack – wide but powerful stride” – Steve Kounianos, The Draft Analyst
Florida Panthers - Kasper Puutio
Puutio is another player that has been developed within the Finnish League system, and has shown off his excellence at the past two World Juniors Hockey Tournament. The former sixth round pick of the Florida Panthers, has helped lead Team Finland to a silver, and bronze medal over the past two seasons.
Puutio is a player that can be used in all roles. Defensively he is strong on the puck and likes to use his body. He is a great skater, that matches the speed of opposing defenders well. On the power play, Puutio has cannon of a shot, he likes to shoot the puck. Puutio transitions the puck well, like other Finnish defenders.
“Puutio is a slick and poised defenseman, whose best single attribute is his skating. He also operates the puck under the pressure with calmness…The Finn’s vision is strong and his passing is solid. The combination of excellent skating and vision makes Puutio’s game effective on today’s hockey standards. His anticipation is also well better than average.” – Markus Suhonen, FinnProspects.com
Last season with KalPa of the Liiga, Puutio suited up for 51 games recording five goals and five assists. At this past World Juniors, Puutio was named the top d-man of the IIHF World Juniors. During, Puutio's run with Team Finland, the d-man recorded four goals, and three assists.