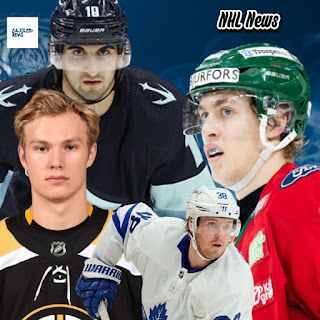 Yes, at last we are nearing the start of the 2022-23 season, a time in when all 32 teams have a shot at winning Stanley Cup. Here are some of the top headlines and notes, prior to the NHL season:

The Boston Bruins have announced their roster for the upcoming Buffalo Sabres Prospect Tournament at the LECOM Harborcenter. The tournament is set to run for five days. The Bruins prospects will play against the Habs, Devils, Penguins, Senators, and Sabres prospects over the course of the tournament.

Highlighting the offensive group is former first-round pick John Beecher. The former U-of-Michigan star signed to become a pro at the end of the prior NCAA season. Beecher is a player that will likely start the season in the AHL. The lengthy forward plays a physical, power forward-like game.

2021 first-round pick Fabian Lysell will also join the Bruins group at the LECOM Harborcenter. Lysell finished last season playing for the Vancouver Giants of the WHL. Lysell also won bronze at the World Juniors with Team Sweden. The Bruins prospect will like to make a name for himself as he hopes to make the Bruins roster out of camp.

Bruins top pick Matthew Poitras from the 2022 NHL Draft will also join the team in Buffalo.The Bruins' second-round pick finished a successful season playing for the Guelph Storm of the OHL. Poitras is a player that can play both sides of the game. The young centerman is likely to return to the OHL for the 2022-23 season.

F: Joey Abate, John Beecher, Curtis Hall, James Hardie*, Brett Harrison**, Ryan Humphrey*, Keltie Jeri-Leon*, Jakub Lauko, Fabian Lysell, Marc McLaughlin, Georgii Merkulov, Matthew Poitras, Brayden Schuurman*, Luke Toporowski
D: J.D. Greenway, Victor Berglund, Frederic Brunet, Mike Callahan, Jackson Edward, Grant Gabriele, Fedor Gordeev, Ryan Mast, Jacob Wilson, Kai Wissman
G: Brandon Bussi, Reid Dyck
Matty Beniers, an early favourite for ROY
Beniers was always widely regarded as a top prospect in the realm of hockey. Beniers showcased his skills briefly at the conclusion of his NCAA season with Michigan. Beniers ended up suiting up for ten games with the Seattle Kraken last season.
Beniers impressed during his brief stint with the big club. The Mass native ended the season with three goals and six points. Beniers will start the 2022-23 season as the number one centerman for the new Seattle Kraken.
Beniers plays a two-way game; he has a powerful stride and is always capable of producing offense. The forward is regarded as one of the smartest players on the ice. He uses his speed to backcheck while also getting up and down in the play.
What's Happening with Rasmus Sandin?
The Toronto Maple Leafs and Rasmus Sandin are still far from a contract extension, as the Swedish d-man currently sits as a restricted free agent. Sandin was drafted by the Leafs during the 2018 NHL Entry Draft, during the first round, and is coming off his first full season in the league.
With training camp just days away, the Leafs will need to make a roster move, or transaction, in order to bring back their d-man. Toronto sits just over $1,000,000 over the cap hit.
Sandin would be entering his third season with the Toronto Maple Leafs. Last season, the D-man played in 51 games and recorded 16 points. Could the hold-out be that Sandin doesn't figure himself in the Leafs' top-six?
Simon Edvinsson Likely to make NHL roster
Edvinsson was a former sixth-overall selection by the Detroit Red Wings last season. Edvinsson stands at a massive 6-foot-4-inches and weighs in at 203 pounds. With his enormous NHL size, the D-man hopes to make the Wings' NHL roster.
The Swedish d-man excelled both at the SHL and junior levels last season. Edvinsson played for the top SHL team, Frolunda, last season. As an 18-year-old, Edvinsson suited up for 44 games and recorded 21 points. The Swede also represented his country at the WJC, where he and Sweden won bronze.
Edvinsson is regarded as a prospect with a high floor; he has the size and skating to compete at the NHL level. He is an aggressive player who creates some offense because of this. He is an active defenseman, and that likely figures into a top-four NHL role, if not a top-pairing role.