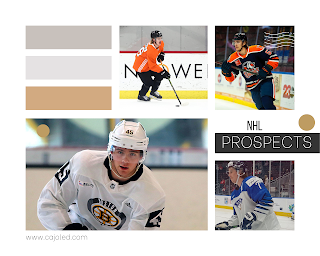 Prospecting is one of most important aspects within an NHL organization. The ability to properly scout and predict a teenager's future can furthermore drive a club ahead of the pack. Here are four prospects that have started the season off slow, but have the potential to become future NHL veterans:

It is quite clear this season that Topi Niemela is not at the same offensive pace as his prior season in the Finnish Liiga. Although this is not necessarily a worry for the Leafs' organization, Niemela has shown the ability to be defensively sound while playing a top role on his team.
The Finnish Liiga is noted as a defensive-minded league with frequent low-scoring games. For example, Niemela's team, Karpat, sits fifth in the league, despite having only scored an average of two goals per game. So far this season, Niemela has recorded four goals and three assists in 25 games.
Last season, Niemela broke out offensively during the first half of the season before drying out near the end of the season. The Finnish native led his team in points with 10 goals and 22 assists.
The Leafs' prospect will likely make his way to North America after the conclusion of his Finnish Liiga season. Although it is evident that Niemela is not as offensively dynamic this season, he is still a force to be reckoned with.

Samu Tuomaala was among the newest wave of Finnish stars drafted during the 2021 Draft. The once-promised first-round talent slipped to the 46th overall selection when the Flyers topped him with their first pick of the draft.
Ever since his draft year, Tuomaala has yet to show improvement playing both in the junior and professional leagues in Finland. For instance, last season Tuomaala split time with two Liiga teams, each playing in 21 games and recording only two points.
This was especially disappointing as Tuomaala's entire game revolves around his knack for creating offense. Prior to his draft, analysts noted the Finnish winger as a pure sniper who has a shoot-first mentality and was tearing up the lower-level junior leagues.
This season, in particular, it was clear that the winger was not performing at a professional level.Tuomaala played seven games for his Jukurit team before he was demoted to the Mestis, the second-tier Finnish league.
Tuomaala has so far found success playing in the second-tier league, with seven points in five games. Although it is clear to Flyers fans that the highly touted forward is on a slower development path.

Yes. John Beecher is a former first-round pick of the Boston Bruins, when team GM Don Sweeney selected the forward during the 2018 NHL Draft (30th overall). Beecher isn't a player that will score a ridiculous amount of points, but he is a hard-working, physical player.
Beecher's junior career was full of mixed emotions. From expecting an offer from the University of Michigan to riding the pine in his final season The New York native played in a total of 81 games with the Wolverines, tallying just 19 goals and 20 assists throughout three seasons.
Last season, we saw Beecher take the next step in his development as he adapted to the pro game with the Providence Bruins in the AHL. The left-handed forward suited up for nine games, recording three goals and two assists. During his brief stint at the pro level, Beecher looked comfortable and physically prepared.
The start to the 2022–23 season has been a little rocky for the power forward. Beecher started the season cold before having a hot stretch of points in the AHL. The Bruins' pick currently supports six points in 17 games.

It is now within a prospect's development phase when we question a player like Raphael Lavoie. Will this player be able to make an impact at the NHL level? So far this season, as a 22-year-old, the Oilers' pick has had a horrible start.
Lavoie, a once-highly regarded junior prospect, has yet to translate his offensive production to the pro level.The former second-round pick posted a career-best 26 points in 56 games last season in the AHL.
The Oilers' prospect has seen a regression in play this season, despite playing at the same level. Lavoie has just three points in nine games this season. Edmonton simply needs more in Lavoie, as he sits on the brink as a prospect.

December 05, 2022
Drafting and developing are two key characteristics that are needed within each and every NHL organization, in order to achieve their goal of winning a Stanley Cup. Confidence is one of the most important aspects in a young hockey players game, here are four players that have impressed so far this season: Fraser Minten, Kamloops Blazers (Toronto Maple Leafs) There is no doubt in mind that Leafs' prospect Fraser Minten is one confident man. Minten has so far been one of the most impactful players on his stacked Kamloops' team. The Blazers sit third in the Western Conference, although are guaranteed a spot at the upcoming Memorial Cup, as they set to host the event in 2023. The Leafs first-pick during the 2022 NHL Entry Draft has gotten off to a terrific start in his third season of junior hockey. Previously, the Leafs' used the 38th overall selection to take Minten, who put up a very solid 20 goals and 35 assists last season. This is a player who has constantly improved thro
Post a Comment
Read more

November 22, 2022
The American Hockey League is known as the second-tier professional hockey league in the entire world. The league filters some of the top prospects and the most elite hockey players on this planet. Here are five NHL prospects that have been dominating the AHL this season: Fabian Lysell - Providence Bruins (Boston) Do the Boston Bruins need more positivity? Well, there most recent first-round draft pick, Fabian Lysell is dominating the AHL. Lysell was touted as one of the premier prospects during the 2021 NHL Entry Draft, before dropping to the 21st overall selection. Sweden, pff! Ever since coming to North American, Lysell has refocused his game back to the elite, scoring abilities we saw when he was a teenager. For example, last season with the Vancouver Giants of the WHL. Lysell was the team leader in points and assists, the Swede recorded 40 apples, along with 62 points in 53 games. The Boston Bruins are tremendously proud with the development of Lysell over the past few seasons. Bo
Post a Comment
Read more